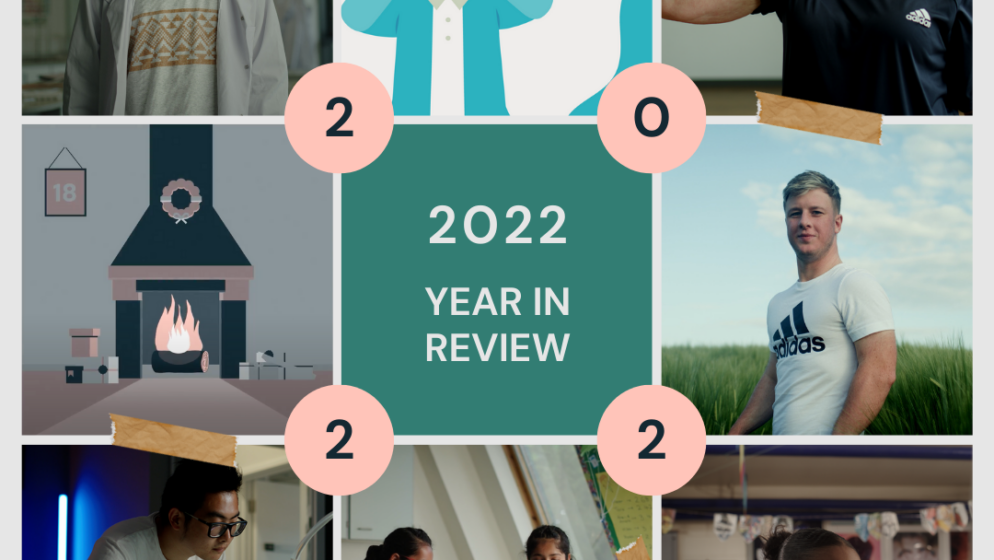 As we roll into 2023, it seems like as good a time as any to reflect on the year just gone. In short, it’s been an exciting and rewarding year for Neck of the Woods, and we hope that you can say the same! The headline is that last year has been one of our best years ever. We worked on some super exciting projects, we pushed ourselves to do new things and we worked with new change makers and plenty of returning ones. It’d be a pretty short blog post if we left it at though, so let’s unpack all of that a little bit and delve into what 2022 was really like for us. Let’s get into it!

We worked a bunch. Sometimes to the point where looking at our Google calendar became just a touch overwhelming. We haven’t been as rigorous at tracking how many days we worked and what we did on those days for this blog, but trust us when we say that 2022 was a hectic year. Honestly, we probably wouldn’t have had it any other way because pretty much every day was spent working on projects for people who are looking to make the world a better place. There are always the admin days and things like that in between, but the vast majority of our time was spent working directly on projects. And not just any projects either, we were working on some of the most challenging and rewarding films yet.

From having full creative freedom on projects like our film with Barton Peveril College to creating films shown in parliament for Sebastian’s Action Trust, we’ve worked on some really special films. Not only have these projects been creatively and personally fulfilling, they’ve also pushed us in terms of technical and creative choices. We’ve done things on projects that we’ve never done before, tried new techniques and really pushed ourselves to be as innovative as we can be.

The bottom line is that we’re proud of what we’ve worked on this year. We can be proud of the films themselves and the number of projects that we’ve worked on, but, actually, we’re most proud of our creative growth. We can safely say that as a result of the work that we’ve done this year we are all better filmmakers and storytellers, and that’s one of the most important reasons why we do what we do.

This will be the shortest section by far, and it’s really for the gear nerds out there. 2022 was a year where we really invested in Neck of the Woods as a business. The vast majority of this investment came in the form of new equipment and new people (more on that later though). More than any other year we spent carefully on new equipment that would allow us to do more on every project that we worked on. We invested money in lighting, camera equipment and camera movement gear like gimbals and a Dana Dolly. Each investment has made our productions easier and they’ve unlocked new production methods which make for better films.

It’s not all about the gear, we get that. That being said, we feel like we’ve invested sensibly in equipment and our clients are seeing the benefit of this.

This past year was supposed to be a year of calm and stability for Neck of the Woods. Turns out that wasn’t to be the case.

Having hired 2 people in 2021, we told ourselves that we’d be taking it easy and holding off a while on hiring any more people. Then the projects rolled in and it became abundantly clear that we needed more people on board in order to make these projects happen. In particular it became apparent that we needed to add to our animation and production teams, so we did just that.

We were so excited to welcome Charlie (our Illustrator and Junior Animator) and Joe (our Camera Operator) on board. Without going into too much detail, when we met both of them they felt instantly right for our team. It also helped that they were super talented.

Over the course of the year we’ve seen the skills and experience that they both bring. We’ve seen how our projects have gotten better as a result of working with them and we are so grateful to have them on board.

Strap in, this is a long one.

Something that’s really important to us is that as a business we go some way to helping young people with their media careers. It’s the other half of why we do what we do, and we’re proud to be proactive about it. It’s hard to put into numbers, but this year we made a real effort to make good on our goal as a social enterprise.

Perhaps the biggest thing we did is run the first year of our Young Filmmakers Fund. We’re so excited that it happened, and we learned a lot from the process. It’s something that we’re going to refine as we go forward, but the good news is that the fund itself is here to stay. We want to help as many young filmmakers as we can to tell socially positive stories.

That’s the future though, what about the winners of 2022’s Film Fund? Well, their names are Anas, Joshua and Lauren. Each one of them is a young, talented filmmaker with a passion for telling stories for social good.

Anas and Joshua’s film was about a simple question, is Southampton as a city a disconnected place? It’s an interesting question, and we won’t go into any more detail because you should really watch how they try and answer it.

Lauren’s film is about how women support other women in situations that are uncomfortable or even abusive. It’s a way of looking at a difficult topic with positivity and heart without trivialising the problem.

You can watch both film’s here:

Aside from our Film Fund, we also delivered talks at Barton Peveril College and Solent University, delivered workshops to charities and took part in the BBC’s ‘Share Your Story’ programme. Our hope is that in doing these kinds of events, we can show people how important storytelling is and we can show young people that there is a media career out there if they want it.

We can do better

2022 was a great year for us from a business and social enterprise perspective, but we can do better in 2023. We don’t want to stand still and we don’t want to get to this time next year and feel like we should have done more.

We will continue to invest in new equipment and explore new ways of making films. We’re proud of the work produced in 2022, but we want the films we make and the stories we tell in 2023 to be even better. We’ll do our best to be more adventurous, to try and tell more impactful stories and to make even more of a difference for our clients and collaborators. There aren’t plans to expand the team, but we said that last year right? So who knows.

2023 will see us launch the 2nd year of our Young Filmmakers Fund. We’re so excited to see what this yields. We’re also going to be expanding the area that this runs in. After keeping it small to start with so that we could learn a few important lessons, we want to reach even more people. Our film fund will run nationally, and we’re hoping to be snowed under with entries.

We will also look at what we do with our profits and see if we can do something socially positive with a portion of them. We have some ideas floating around about how we can grow our output as a social enterprise and will settle on what to do next as soon as we can.

We want to say thank you. To every client, collaborator, storyteller and anyone else we’ve worked with, thank you. You have been amazing, inspiring and at times open about the most difficult experiences imaginable. Without you there would be no us, but there would also be far less good in the world. And with that, the blog is over. Let’s see what 2023 holds in store for us all.