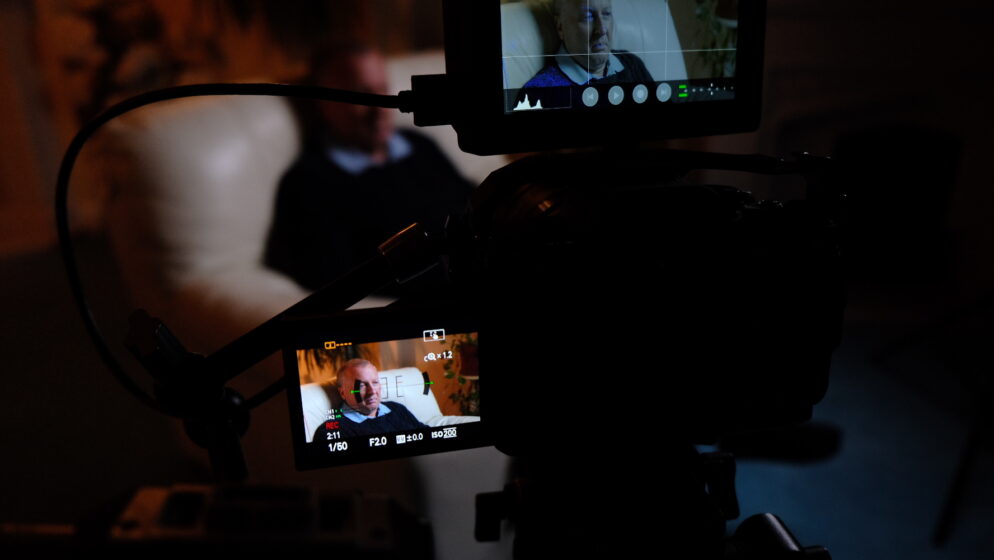 Stories about people are our absolute favourite to tell. Not just because they connect with audiences more than anything else, but also because we love finding out about other people. Their experiences are moving and interesting, and there is something really compelling about getting to know someone in that way. For us, it’s an absolute pleasure. Human stories sit on a kind of spectrum though. Some are joyful stories of triumph; others are much more somber. For our latest project with Ageing Better, we were working on a project that had a particularly serious tone, as is often the case when you work with people who are looking to change the world.

This project was about telling the stories of 5 people, all 50+, who had had an experience or experiences of ageism in the recruitment process. Ageing Better wanted to help them share their experiences to change things for the future. The 6 films are a part of a wider effort, sitting alongside a report covering the state of recruitment for older people in the UK. This report goes into so much depth, but there is a very human side to the research, and these films would form part of that. They would be there to be an emotional way into a topic that not everyone is fully aware of.

In terms of how the stories were going to be told, the focus would be entirely on interviews. There wasn’t the need for b-roll to make these stories engaging for the audience, and the stories didn’t really need illustrating in this way. Instead, the goal was to put people in front of an audience, share their real experiences and move them this way. One slight concession was the use of portrait shots of the storyteller, which not only served a practical purpose, but would also highlight particularly emotive points in the films.

The first major challenge that we faced with this project was the fact that we were dealing with such a vast topic, with 5 key storytellers. The potential to get overwhelmed was very real, but luckily for us Ageing Better were the perfect collaborators. They were there to work through that with us, providing us with reports, research and thoughts that helped us to really narrow down our focus. We also have something that we like to bring to the table for projects like this, pre-interviews. As well as having so much existing information to hand, having a casual conversation with each of the storytellers gave us valuable insight into what they’d been through. There are little moments to be gleaned from this process, just small things that otherwise might have been missed. By the time we’d spoken to each person, we knew them that little bit better, and they knew us as people, not just a camera crew. When you bring all of that together, it meant that we could go into interviews with a plan. Not something rigid, but a base to build on with the storyteller.

Having a fruitful pre-production phase was a real blessing. It meant we could go into production with a clear vision and make all of our plans a reality. In our experience, it makes the production stage so much more enjoyable, taking out any anxiety for us and the client.

For these films, one of the most important things to show was that the issue of ageism in recruitment is widespread. It’s not limited to one particular industry or location. To show that though, we would need to meet people from different locations and backgrounds. We wouldn’t usually give that a second thought, but we had a global pandemic to contend with. We could still travel, but it did mean that we would have to be extra careful with our storytellers. With the right procedures in place, we were able to minimise any risks and capture each of their stories.

On top of having stories in mind that we wanted to tell, we also had a really clear picture of how we wanted these films to look and feel. Ultimately, these stories were very personal, and we wanted to create something that felt right for that. We took the decision to film in our storytellers homes and wanted to utilise a combination of natural lighting and subtle additional lighting to get the look. Our plan was to give the images a more contrasty look, to help carry the emotional tone of the films. Having a lighting nerd in our team, this was a real treat, and so a lot of time and care went into planning setups that were powerful but compact.

There was one other part of this visual language that we want to talk about: the framing. If you watch the films you’ll notice that some of the framing is… unconventional? This is intentional, we wanted to create a sense that something is wrong to carry the films’ story of injustice. We have to admit, it’s a gamble whenever you stray away from conventions, but we’re really pleased with how the images came out.

The production for these films was challenging and rewarding in equal measures. We met 5 really interesting and kind people, but we also captured a lot of stories that were really difficult to hear. This is something that we find is often the case when you work with change makers like we do. As well as feeling frustrated about the situations these people found themselves in, it left us with an even stronger determination to do these stories justice. If we were going to be sharing these stories, we wanted to be sensitive, but also tell them in a way that moves people to act.

We had a challenge on our hands though. We had 5 hours of interviews, that needed to be condensed down into a few minutes without losing impact. No pressure. The way that we dealt with that was the way that we always deal with these things; we organised. It’s not the glamorous side of editing but having thematic collections of footage meant we were able to plan our edits and get the right results.

For the hero film we were always working to create a balanced narrative. That meant making sure that everyone’s voice was heard, but also hitting the key emotional points we had planned for. The trick was combining these stories in a way that created an emotive story arc that people could get engrossed in, but also addressing the goal of the film. For the other films, the initial plan was for each storyteller to have their own film. We changed our mind about this and put it to the Ageing Better team that maybe we could explore themes instead. As all good collaborators do, they took our feedback onboard and thought about it, before giving us the go ahead. We identified 5 key topics from our interviews and used these parts to create the shorter additional films.

Working with Neck of the Woods Films is a delight. From the proposal and pre-production stage, all the way through to adding the final touches to the films, they’ve been incredibly patient and ardent. They have passionately taken on all elements of the project, engrossing themselves in the films and the work informing them. Neck of the Woods Films bring the perfect balance of experience, vision and trust of the client to deliver on a project that has exceeded our expectations

These films were great to work on, and we’re really proud of the stories that we’ve been able to tell for Ageing Better. We’re so pleased with how they came together, and we’re thrilled that we were able to be a part of creating something that will make a real difference. With everything that’s going on in the world right, still being able to do the thing that we love most is just one of the ways that we’re very fortunate.

The project was challenging in lots of ways, but we learned a lot of lessons that we’ll take into new projects. It really helped us to refine our process of working on long interviews and it was an opportunity to further develop the ways we work to protect our storytellers. From a practical point of view, it was also really interesting to see the relationship between stories and factual research. This is something that we think is really going to help with other projects with change makers. It was also a reminder that when you work with other people you need to be equal partners. This project came together as the result of lots of people’s hard work. Having the kind of relationship we did was fantastic and only helped the film. It was an affirmation that our long-held belief that collaboration is key for any project still rings true.

We’re so grateful to Ageing Better for working on this project, and we’re looking forward to our next project together!

If you want to read the report that these films accompany, you can find it here: https://www.ageing-better.org.uk/too-much-experience-ageism-recruitment-online